I posted yesterday that I didn’t know when I’d be able to share the cover art for Red Hood’s Revenge [B&N | Mysterious Galaxy | Amazon].  The answer, apparently, was “very, very soon.”  I spotted the cover at B&N, then received a cleaner copy from DAW.  Click the thumbnail for a larger version.

As noted before, we had to switch artists in mid-series.  This was done by Mel Grant (who also did my goblin covers).  The cover for Mermaid remains my favorite, but I think he did a great job making sure it was recognizable and consistent with the earlier books.

I also asked yesterday whether an anime-style Snoopy fighting cat ninjas would be awesome or terrifying.  socchan took up the challenge, and the answer is: Awesome!!!

Page proofs for Red Hood have also arrived.  I know how I’ll be spending my evenings for the next few weeks.  (But this means I should be able to post a sample chapter from the book soon!)

Thank you to everyone who suggested titles for book four.  After talking to my editor, the final title will be:

The Snow Queen’s Snare was a close runner-up, but didn’t quite fit the plot as well.  Shadow was suggested almost simultaneously by two users on LJ and my jimchines.com blog, so I’ve decided to name them both winners.  Congrats to miladygrey and Sewicked.  I’ll be e-mailing you about your prizes!

Finally, because I haven’t done one in a little while, a LEGO piano by catarino.  I used to play piano, and I love the detail on this thing.  Check this closeup of the keys, or just click the image below for more shots of the piano and catarino’s other work. 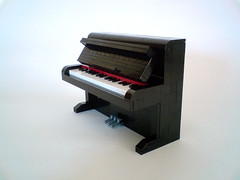