Racism and the Backlash Against Black Hermione

I had a long layover in Minneapolis when I was flying out to Launch Pad at the start of the month, and ended up in a bit of a heated Twitter exchange, as one does. It started with this Tweet.

Folks pissed abt. Hermione being black b/c “she’s white in the books.” Oops! Can’t use that excuse for your racism. pic.twitter.com/AhVH7M1nt4

Naturally, this led to responses like, “Why make this automatically about racism? People can’t disagree just because they don’t think it’s true to character?” and “Assuming they’re racist w/o knowing anything else about them makes you guilty of same prejudice you accuse them of,” along with the ever-popular, “Is that actress best audition, or was production going just for ‘diversity’?” 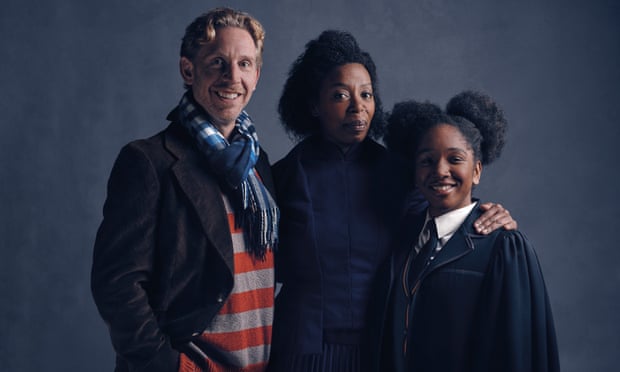 Ron, Hermione, and Rose Granger-Weasley from Harry Potter and the Cursed Child

What is it about the suggestion that someone or something might be racist that makes people lose their minds? It reminds me of a conversation I had years ago where in I was told, in all seriousness, that yeah, racism is bad, but being accused of racism is worse.

Some thoughts in the aftermath of that argument earlier this month:

1. Saying, “Hey, this thing/comment/whatever is racist” does not mean “You personally are a horrible person who should be shot and stabbed and otherwise killed to death for your horrible horribleness.”

We live in an imperfect world. It’s pretty much impossible to grow up in a context of racism and sexism and other forms of inequality and discrimination without having some of that garbage get into your head. We all stumble. We all make mistakes. We’ve all absorbed messed-up ideas and assumptions. That doesn’t mean we’re all horrible, awful people. It means we’re human.

Doubling down on racism and other ugliness, on the other hand? Defending and trying to justify it? Belittling and minimizing it? Assuming it’s so much more important to wave your “I’M NOT RACIST!” flag than it is to actually, you know, try to fight and reduce racism? Yeah, that crap steps you closer to the horrible person category.

2. Questioning whether a person of color was picked just for the sake of diversity? That’s pretty messed up. And yeah, racist. Let’s talk about why.

Take a look at this chart, from a PBS article about race in Hollywood.

In 2010, non-Hispanic whites made up 63.7% of the U.S. population, but we consistently have about 75% of the roles in these films. We’re overrepresented. And yet how often does anyone ask if a white actor was cast not because they had the best audition, but as a result of their whiteness? To meet some unconscious white quota, or for the sake of making sure the film is white enough to be comfortable for “mainstream” audiences, whatever that means?

If you assume white actors (or authors, or speakers, or whatever) got the job because they were best qualified, but question whether people of color were chosen to meet some kind of diversity quota, guess what?

Before you go off with knee-jerk defensiveness, make sure you understand what’s being said. Re: Hermione, one response I saw was that people had gotten used to Emma Watson as Hermione, and between that and illustrations in some editions of the books that portrayed her as white, it was totally understandable that people might stumble over seeing a black actress take over the role.

Personally, I’m having trouble adjusting to all of the new actors, having imprinted pretty strongly on the movie cast. But that’s not what I was tweeting about. I didn’t say anything about people who were having trouble resetting their mental Hermione. I was talking to people who are pissed off about it.

If the only casting change you’re struggling with is the role of Hermione, and if you’re actively pissed off about that one change? Please see the previous gif.

4. What’s up with the whole, “Talking about race/racism makes you racist!” fallacy?

It feels like elementary school-style arguing. “I know you are but what am I?”

Pointing out that white people are overrepresented in Hollywood doesn’t actually make me racist against white people, no matter how much you want to play the “I’m rubber, you’re glue,” card.

Or maybe it’s the colorblindness fallacy. The idea that “I don’t see color” is a good thing, and falling short of that ideal makes you racist. The thing is, “not seeing color” means refusing to see or acknowledge the whole of who people are. It means ignoring systemic inequality and discrimination, because how can you see racism when you refuse to see race? It’s a luxury, a way or turning your back on very real problems. Basically, it’s a cop-out.

5. Some commentary from folks who aren’t me.

I Don’t See Color” – An excellent article by Michi Trota.

As a black girl who identified with Hermione soooo much growing up, thank you @jk_rowling. Twelve year old me is crying happy tears.